I was reading the posts over on lobste.rs and saw this post: Is sudo almost useless?. Typically I see sudo as a safety belt to protect you from doing something stupid with administrator privileges rather than a security shield. But that doesn't mean it can't be both

As with ssh, outlined in my previous post TOTP with SSH (Google Auth), you can certainly boost your sudo usefulness security wise by throwing 2FA via google-authenticator-libpam on top of it.

We now need to create the secret key, this should not be kept in the user folder, after all what is the point of 2FA if the user we are authenticating can just read the secret files. In my case I keep them in the root dir

Replace the variable ${USER} if/when you create a key for a user other than the active one.

You will see a QR code/secret key that you can scan with a TOTP app like andotp, authy, google authenticator or in my case I added it to my yubikey. There are also your emergency scratch codes that you should record somewhere safe.

You now need to let PAM know it should be checking the codes. There are two ways to do this, Mandatory and Only if secret key exists. I have it as Mandatory any user using sudo MUST have a secret key

In /etc/pam.d/sudo add the following configuration lines to the end of the file.

Bonus do this for su as well

You can do the same thing for su as well however obviously the user variable will be root rather than the user attempting to elevate their privilege's.

Setup the key as before, just for the root user

In /etc/pam.d/su add the following configuration lines to the end of the file.

About a month ago there was an urgent security notice from the Nexcloud devs regarding a flaw in Nginx php-fpm and the associated Nextcloud config. Unfortunately we are now seeing it being exploited in the wild.

A new ransomware has been found in the wild that is currently undetected by antivirus engines on public scanning platforms. Its name is NextCry due to the extension appended to encrypted files and that it targets clients of the NextCloud file sync and share service.

The malware targets Nextcloud instances and for the time being there is no free decryption tool available for victims.

The Nextcloud devs have confirmed that it doesn't appear to be an issue with Nextcloud itself and that patching and updating is highly advised.

Have extra security advice? Let me know in the comments down below!

Inspired by this post I decided to add a notification on my phone every time an ssh session began on my servers. Seeing as I make use of Gotify for selfhosted push notifications I used that rather than signal.

First I created created the file /usr/local/bin/sshnotif. At the top you can add your own token and Gotify url

Update: I had to push the current time back a full minute in order to improve consistency. I'll defiantly want to revisit this at a later date

In the file /etc/pam.d/sshd add the following line

I now get a nice notification with all the open SSH sessions listed. Unlike the post on 8192.one I didn't want any IP address resolution using an online service. I plan on integrating the MaxMind GeoLite2 database at some point. However as I already have Graylog set up to do this it's not a high priority for me.

I often see questions on /r/selfhosted on how to secure a server. Here is a quick checklist of things you might want to look into.

Lock down the Server This morning I received a link in Facebook messenger from an old friend, someone I haven't spoken to in years. It was obviously a phishing link, the title was wrong "Dugite is this video of you?" and the preview image was blurry, like it was stuck not loading.

What Interests me is the reaction when this friend posted on their wall, within minuets, not to open any messages from them and they "HAVE A VIRUS ON MY PHONE". Out of 7 people 3 opened the obviously shady link.

Not one of these people who opened this link mentioned they will now need to change their password, in fact one person even said it all should be ok once it's gone through their entire address book. The non-technical people, to me at least, seem to be treating phishing and malware like you would the common cold. It'll pass, fact of life and not a real concern.

They of course should be very concerned with the majority of web browsing occurring on the mobile the amount of data that is potentially stored on a phone is astronomically large. From your banking app to your photos and everything you can gain access through your email accounts is at risk. Mobile operating systems are, thankfully, very locked down with each app operating somewhat isolated from the others, but that's not a guarantee.

I fear the next decade of tech breaches are going to get ugly and there just isn't a technical solution to user apathy.

In my last post I described how I decrypt my home server remotely with ssh. Today I would like to share how I like to lock/unlock my ssh port with an encrypted port knocking implementation fwknop

The issue with port knocking

On the face of it port knocking looks like a good idea. Lock down your ssh port until you need it, avoiding any zero day issues with the ssh protocols. The problem is this, port knocking is sent in the clear over the network. Anyone looking can see your knock "code", much like if you had a secret door knock some one around the corner could heard the pattern of your knocks.

This is where fwknop comes in, it's SPA (Single Packet Authorization) cannot be re-sent it is one time only. Not to mention it's faster as you are only sending the one packet.

The main issue I had with fwknop is by default you have to specify the source IP address you want to be able to access your server. I found this to be quite painful to set-up, so I found a simple way around the issue.

Note: this only works if you are blocking ports by default. I use UFW to simplify that process. See this Digital Ocean tutorial on the basics of UFW

In Debian based systems fwknop is split into fwknop-client and fwknop-server. We will want both of them

First we need to enable the fwknop server in the /etc/default/fwknop-server file. by changing the line START_DAEMON="no"

Next we need to set up the basic config rules on the server found in /etc/fwknop/fwknopd.conf Debian and Ubuntu have changed the default interface name from eth0 to enp3s0 so we have to set that. We can also change the listening port here.

Now we use fwknop to generate our key's. We could use GpG here, but I didn't feel the extra encryption brings much to the table as we are only opening the ssh port and I have public key authentication and TOTP enabled.

You can now find the KEY_BASE64 and HMAC_KEY_BASE64 in ~/.fwknoprc we will need these for the /etc/fwknop/access.conf file and the client.

In the /etc/fwknop/access.conf file. Note: I substituted the iptable commands for ufw commands. We don't have to worry about our ssh session being kicked as once it's connected the CMD_CYCLE_CLOSE (at least with ufw) won't close the existing connection.

A word of warning, fwknop can run arbitrary commands if ENABLE_CMD_EXEC is enabled. I don't see why you would ever really want to do that. You can also run any bash script from CMD_CYCLE_OPEN and CMD_CYCLE_CLOSE with the optional variables $PROTO, $PORT and $SRC. You can potentially get yourself in a lot of trouble if you do this so proceed with caution.

Now we need to setup the systemd file /etc/systemd/system/fwknop-server.service. Note: on a ubuntu (18.04.4 LTS) install I had to create the folder /var/fwknop/.

NOTE: [email protected] in the comments also mentioned the PID file needs to be in /run/fwknop dir in Ubuntu 20.04

Then we just enable and start the service

Running sudo systemctl status fwknop-server.service should now show you the service is active Active: active (running). Currently if you have already allowed port 22 with ufw it will stay open until the first time you cycle fwknop with a client.

You have three options fwknop-client, fwknop2 on android - [F-Droid] - [Google play] or fwknop-gui available on Windows, Mac and Linux

The Firewall timeout is in seconds and can be anything as long as it's long enough for you to authenticate. Remember if you have the same set-up as I do, you wont get kicked after the timeout.

And there we go a nice locked ssh port. You will now have to send a SLA to your server prior to connecting with your ssh client.

Having a small home server I've always wanted to encrypt my files, however I have never wanted to be locked out if I'm far away. Enter dropbear ssh. A small light weight ssh server already packaged in debian to work prior to decryption.

Note: initramfs will kick up an error after installing dropbear-initramfs. This is solved after adding your public key

You can further secure dropbear by disabling forwarding and limiting it to only executing the cryptroot-unlock command.

Out of the box keepass recognizes the URI ssh:// and will open it with putty. However it is limited, you can't change ports from the default port 22 nor can you save a convenient list of port forwards. Thankfully this is something you can change.

Things you will need:

We will now define a new ssh:// override globaly in keepass. It is possible to also do so per entry, for portability, however I do not use this feature as I run linux at home and use a separate override on that system. Now when you open the url you will have your putty session with port changes and port forwards.

@bryanleeward asked on the thunderbird discourse:

Every few months I get “Security” alerts from Google re my gmail Security Settings, saying: “Turn off less secure access.” IF I do that, then I can’t boot Thunderbird! I’ve had same problem with Thunderbird-gmail using Debian, Trisquel, and Ubuntu.

Yet ironically, when I receive these Google alerts, Thunderbird gives also gives me a warning - “To protect your privacy, Thunderbird has blocked remote content in this message.”

IE to get Thunderbird and gmail to work together, I have to disregard BOTH your security alerts! WHY?.. but more importantly:

Thanks for any help, Bryan

Google considers all 3rd party access to email i.e. Thunderbird, Outlook ect to be Less secure than the web interface. This is both correct and incorrect depending on your situation. Google’s max security disables 3rd party access to your emails, this allows them to: block bad IP’s, use two factor auth and use browser fingerprinting to detect illegitimate access.

Thunderbird is not insecure at all. Google just want’s the majority of users to go through a more limited access method.

I don’t ever see such emails because I enabled two factor auth and use an app password with a limited scope to the Mail app. Consider going this route if it concerns you.

Thunderbird blocks remote content. I.e. it stops images and other files from being loaded from the internet when viewing an email. As email is mostly html automatically loading images from the web is not a great idea security wise. Initially this will be a pain point but you eventually build up a white-list of legitimate remote content, nice and secure.

I recommend using the allow from domain names rather than sender address as that’s harder to spoof than an email address: 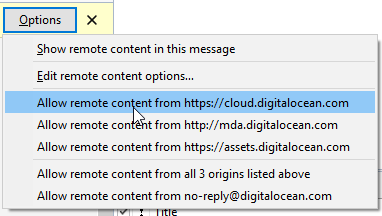